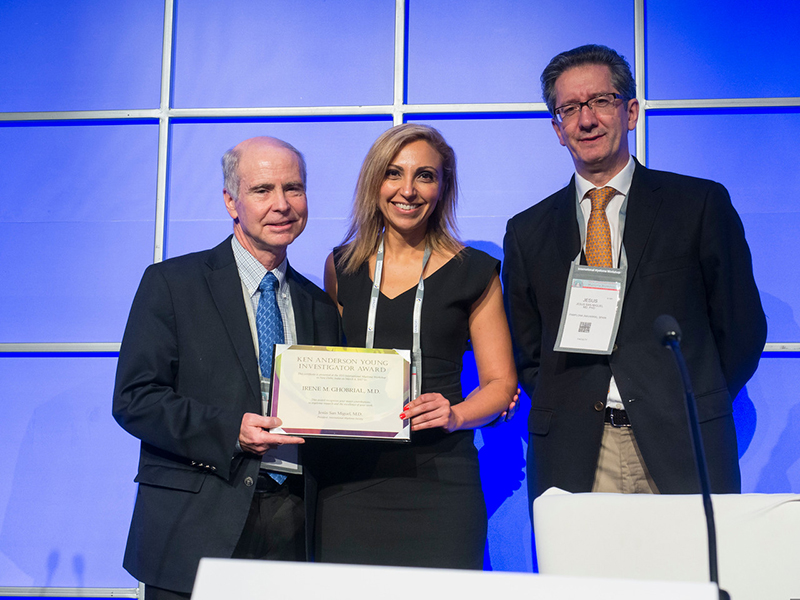 If you have any questions or require additional information regarding the Ken Anderson Basic and Translational Research Award, please contact adminassistant@myelomasociety.org.

Dr. Irene Ghobrial is an Associate Professor at Dana-Farber Cancer Institute (DFCI), Harvard Medical School, Boston, MA and an Associate member of the Broad Institute, Cambridge, MA. She is the director of the Michele & Stephen Kirsch Laboratory and co-director of the Center for Prevention of Progression (CPOP) at DFCI. In addition, she is the co-leader of the Blood Cancer Research Partnership (BCRP), a consortium for innovative clinical trials of community oncology sites coordinated by DFCI.

She received her medical degree from Cairo University School of Medicine, Egypt. She completed her internal medicine training at Wayne State University, MI, and her hematology/oncology subspecialty training at Mayo Clinic College of Medicine, MN.

Her research focuses on understanding mechanisms of tumor progression from early precursor conditions such as monoclonal gammopathy of undetermined significance (MGUS) and Smoldering disease to symptomatic Multiple Myeloma (MM) and Waldenstrom Macroglobulinemia (WM). She specifically focuses on the role of the malignant bone marrow niche in regulating disease progression. She is interested in the development of new molecular/genomic markers that predict progression in precursor conditions which can identify patients who should be eligible for therapeutic interventions to prevent progression or potentially cure the disease at the early stages of the disease before clonal evolution occurs.

She authored or co-authored over 250 publications and book chapters and has received funding support from the National Cancer Institute as well as multiple foundations including Leukemia and Lymphoma Society, Multiple Myeloma Research Foundation, Stand Up to Cancer and International Myeloma Foundation. She has received multiple awards including membership in the American Society of Clinical Investigation (ASCI), Robert A. Kyle Award for Research in Waldenstrom Macroglobulinemia, and Mentor of the Year Award at DFCI in 2014.